The photo to the left was taken yesterday during the anniversary of the Iranian revolution. Anti-Americanism was the theme for the day. The regime even reenacted the arrest of American sailors who 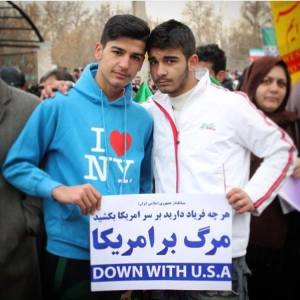 accidentally crossed into Iranian territory in January this year. They were released within a day.

This picture means many different things to many people. To me, it says this: the people of Iran have a much more positive image of the U.S than the regime would have us believe. Because the young guy on the left is wearing a “I LOVE NY” hoodie voluntarily. But the “Down with USA” placard? There is every chance that he and his friend felt that they had to carry it. Or they just did it for show. I am not saying everyone in Iran loves America (there are those who object to US policies in the region), but they are not as anti-US as the regime wants them to be, or shows them to be. In fact the opposite.

God knows how many times as a child in Iran I was forced to chant “Death to America” and Death to Israel” at primary and secondary school. The more I was forced to chant the former, the more it drove me to Break Dance and to become better at it (like these super cool dudes. I also danced at a couple of parties, just like them).

The more I was forced to chant the latter (at a Jewish school), the more it made me love the state of Israel, her people and Zionism.

I don’t know what the background of these two guys is, but what I do know is that the more you are forced to do something on the surface, the more decadent and false such pretensions become. They could even create feelings of admiration for what you are taught to hate.